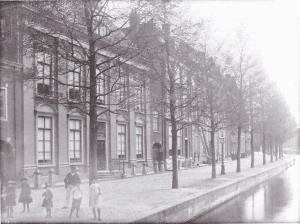 Hotel de Doelen is located on the Rapenburg, one of the most beautiful canals in the Netherlands. Rapeburg is also known by the Royal children, whom lived on the Rapenburg during their studies like Princess Beatrix and King Willem-Alexander.

Hotel de Doelen is situated in a beautiful Patrician’s house. Patrician houses are known as buildings which were in possession of very distinguished, not noble persons or regents. In the past, different mayors of Leiden have lived on Rapenburg 2. Patrician houses didn’t have to adhere to certain rules of an architeturale style, but needed to demonstrate the wealth of the persons who lived there. This is the reason that most of the Patrician houses are richly decorated with the latest ornaments with reference to the period they are built in. The building is built in 1638 in Dutch classicist style . The chimney with wooden carvings in the style of Pieter Post marks this period.

Through the ages there were many alterations and renovations.

The flower painting in the breakfast room is added around 1700 and is painted by Pieter Herdimé(1678-1758, born in Antwerpen, died in Den Haag). He lived in Den Haag since 1697 and painted in Den Haag and other cities numerous door- and chimneypaintings of fruits and flowers.

The stuccowork in the hallway date from 1767, with on the ceiling rocaille ornaments and flower patterns. Above the doors trophies are showed which represent the discretion (snakestaff and mirror), the music (flutes and musicnotes) and the alertness (book, oillamp and bird). 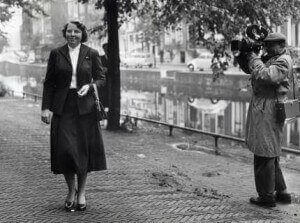 Prinses Beatrix on the Rapenburg

The stairs also date from 1767 is spectacular because of the beautiful sculpt stairsrail.

Since 1945 restaurant De Doelen was set in the building.

In the year 1978 the Bakker family became the owners of this beautiful building. In 1983 they decided to built a few hotelrooms on the top floor. With a rise of restaurants in the 90’s in Leiden, restaurant De Doelen decided to close his doors and renovated the building to an hotel with 18 rooms. Hotel de Doelen was born.

The name “De Doelen” is derived from the early doelen. A doelen was a training ground or shooting range for archers and armed members of the citizen force of The Netherlands. Later the name was used for buildings were archers practiced. This kind of buildings grow in the 17th century, till the importance of citizen force disappeared. The name Doelen is now still used in buildings or streetnames.